We are so excited to have Bonaventure join the Discwoman family. I've been a huge fan of her work from afar aka SoundCloud. After seeing her perform Moogfest this past year I fell in love with her as an artist. Can't wait for more Bonaventure in our life and hear her next project she's working on! —Christine McCharen-Tran 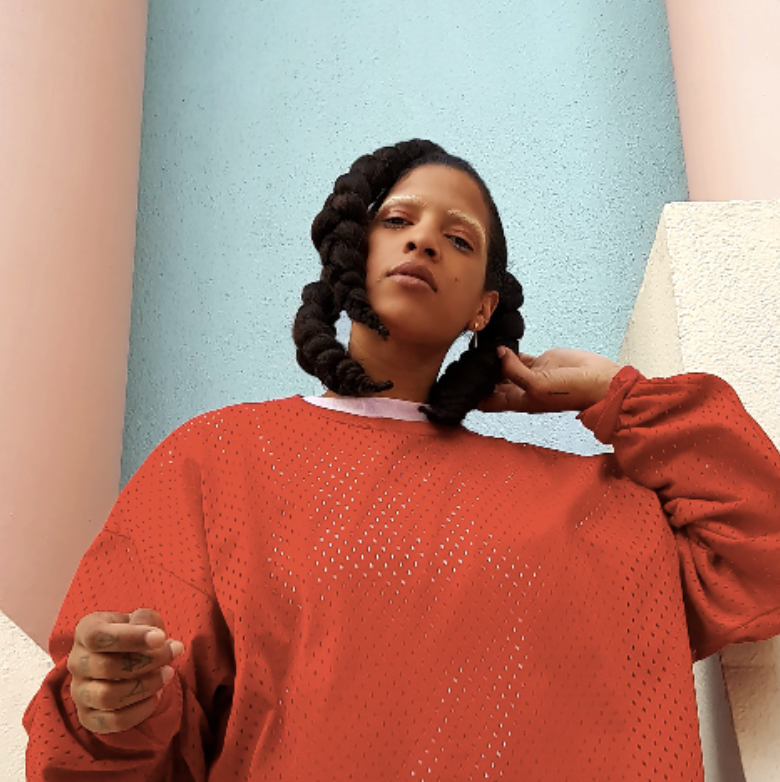 The mix is an updated collage of the music I’ve been listening to the past weeks, unveiling as well stems of my upcoming EP. I started the mix by doing “fitness blends” focusing on the Discwoman roster, with Haram, stud1nt, myself and Umfang, and builded the rest of the mix around that.

At the moment, I am listening to a lot of Kizomba, Kuduro, Tarracho, Moroccan and French-speaking (t)rap and Lisbon’s Batida scene is driving me mad. At the same time, I am never too far from Gabber, Jersey and Hard Style; it goes in all directions and I really enjoy this schizophrenic exercise.

A few months after i started to produce music (2016), Anastasia (BCR radio co-founder) invited me to guest on her slot. it was the first time i was seeing cdjs that close and i got super excited but i used traktor and my computer for this first time. i was feeling a bit ashamed because i didn’t know anything about mixing or using hardware, but she was ultra encouraging and made me feel comfortable and valid despite how i felt at first. i think she really has a gift for finding talents and injecting confidence into them, grooming the love out of them. from then on, Sarah Miles (BCR radio co-founder) and Philip Diep (BCR programmer and secret weapon) taught me what they know, and let me in the studio to use the CDJs. BCR basically made me, and continue to mentor me through this day (thank you!).

in january 2016, i uploaded the track Complexion (later released on NON Worldwide) to soundcloud, and the collectif "823" based in Lausanne Switzerland heard the track. They invited me to perform live, but i had only made this track, with no real plans of doing more. i said yes anyway, produced 30 additional minutes of music and heavily watched youtube tutorials on how to build a live set. looking back, the performance wasn’t very good, but went i left stage knowing i had just met the realest me ever.

07.07.2018 Bledarte Festival, Bruxelles. I wish y’all to be booked there next year for their second edition.

i am really touched by Haram, their narrative and generosity have a value that goes way beyond. i got hooked when “identity crisis” was released 2 years ago, and find in their (sonic) discourse elements i can strongly relate to. there are many DJs i dig, but beyond skills i am way more interested in the story behind the tracklist. for the same reason i definitely add to the list KABLAM, Juliana Huxtable, Wutangu, Crystalmess, Maxime Büchi, Ziur, Odete, Sotogang, Moesha 13, Virgil Abloh, Hannah Black, Sergio Hydalgo. all those people have great playlists but also give me fuel to strive to be a good person and as well as an artist.

listen to the mix! and same answer as for the previous question. and i didn’t have the time to add Fanau Spa but this is so strong and important.

mansplaining. annoying at all time but special lame mention when i am behind the decks.

1) the approval, support and benediction of my family for using the name of my deceased nephew as my artist moniker. 2) “i want my daughter to be like you later” after my live set at Moogfest. and in general, hearing that you lift some of the pain other people carry is very special.

i’ve been miseducated about food while growing up, and now that i have a plant based diet both my body and mind feel way, way better. it was a rebirth to do this switch. the second thing is that i just recently rediscovered jumping rope and am so obsessed with it. if i play in your city i will look for a parc to jump in. DM me if you want to join!